In 1973 the Salvation Army Hall at 159, The Broadway in Southall was purchased by Ramgarhia Sabha, Southall and renamed Ramgarhia Hall. The hall provided Facilities for young people in the local community such as training in the martial arts and table tennis, and there were also Facilities for social and cultural get-togethers. 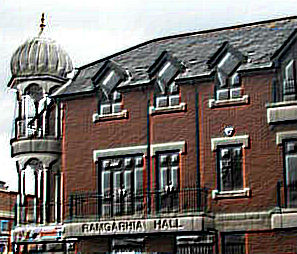 The hall found itself being used for a variety of purposes over the years, including providing overnight stay for a large contingent of marchers in the late 1970s who had marched from Scotland to bring the government’s attention to rising unemployment there. The hall was also privileged to hold the first-ever International Panjabi Conference in 1980 including a display of fine arts and books. The conference, later on, helped to introduce the teaching of Punjabi in schools in Britain.